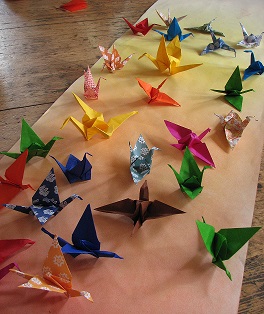 Since 2005 the two Organisations Pressehütte Mutlangen and the European Youth Network BANg work together to educate young people on nuclear weapons. Our aim is not only to bring the knowledge about nuclear weapons to young people but also to empower them to form their own opinion and to stand up for their beliefs.

In various workshops at schools, universities and in youth groups we developed interactive materials. Now we put them together as a "tool box" and present it to you on this website.

Nuclear Test in North Korea
On 6 January North Korea conducted a further nuclear test and is the only country still doing so. The Comprehensive Nuclear Test Ban Treaty Organizatio (CTBTO) has a world wide control system to detect every nuclear test. You can find more information on the North Korean nuclear test on their website: www.ctbto.org.

No more Hiroshima, no more Nagasaki!
On 11:02 on 9 August 1945, a nuclear bomb was dropped on Nagasaki. Nearly everything around it was incinerated by a wall of heat up to 4,000 degrees celsius, and about 74,000 people died as a result of the immediate and long-term effects.
The international campaign to ban nuclear weapons, ICAN, made this video to remember the people that died in Hiroshima and Nagasaki and to encourage you to join our fight to ban nuclear weapons. We owe it to the Hibakusha and the memory of all those killed in the blast to bring the era of nuclear weapons to an end.